I study how beliefs about technology shape our world as much as technological artifacts. I focus especially on the relationship between knowledge, technology, and the self. I explore these themes historically in domains of innovation; engineering studies; and science, engineering, art, and design (SEAD). I also participate critically with engineering educators, SEAD practitioners, and innovation experts.

Every American an Innovator
To innovate is the defining imperative of our time. But what is innovation? What makes someone an innovator? Where did these ideas originate?

My book project traces how innovation has become synonymous with progress in the US. I chart a kaleidoscopic network from the 1960s to now of entrepreneurial scientists, inventors, artists, bureaucrats, venture capitalists, Presidents, and everyday people. I highlight two key features of our innovation age. First, the rise of innovation expertise, including federal policy, design consulting, “lean” startup boot camps, and STEAM curricula. Second, the images of innovators such expertise creates. Exploring this interplay between expertise and imagination reveals what we gain and lose in pursuit of aspirational visions of innovation.

Does America Need More Innovators?
This edited volume brings together leading champions, critics, and reformers of innovation in dialogue to explore the past, present, and future of innovation initiatives. It is a partnership between Virginia Tech and the Smithsonian’s Lemelson Center for the Study of Invention and Innovation. Its organizers are myself, Eric Hintz of the Lemelson Center, and STS PhD student Marie Stettler Kleine. It can be downloaded as a free, open-access edition on the MIT Press website.

“How the Industrial Scientist Got His Groove: Entrepreneurial Journalism and the Fashioning of Technoscientific Innovators,” in Groovy Science: Knowledge, Innovation, and American Counterculture, David Kaiser and W. Patrick McCray, eds. (Chicago: University of Chicago Press, 2016), 337-365.

“‘The Innovators,’ on the creation of the digital revolution, by Walter Isaacson,” Washington Post, October 3, 2014.

Engineers for Change
My first book shows how engineers in the 1960s helped shape our understanding of technological change as the driver of history. I follow engineers who joined the antiwar and civil rights activists of the era. Battling assumptions that they were warmongering organization men, a dissident minority of engineers turned to the era’s critics of technology and challenged their peers to embrace ‘humane technology.’ These dissidents were criticized by conservatives who regarded them as countercultural Luddites. And yet, the radical minority spurred the professional elites to promote a view of technology as a rapidly accelerating force that our institutions are ill-equipped to handle. This ideology of technological change still dominates the worldview of engineers and society at large. Engineers for Change is the first book in the MIT Press Engineering Studies series. Favorably reviewed by historians and engineers alike, the book is used in undergraduate and graduate courses in engineering, history, and STS around the world.

Engineering Studies
“The field of engineering studies is a diverse, interdisciplinary arena of scholarly research built around the question: What are the relationships among the technical and the nontechnical dimensions of engineering practices, and how do these relationships change over time and from place to place?” I chair of the editorial board of the journal Engineering Studies, created by my colleague Gary Downey, in which I have written about the role of imagination in technology and the historical challenges of integrating humanistic design into engineering pedagogy. I also am affiliated faculty in Virginia Tech’s department of engineering education, and have collaborated with colleagues in engineering education, electrical and computing engineering, human centered design, mechanical engineering, and ICAT to engage engineers in STS theories and practices. 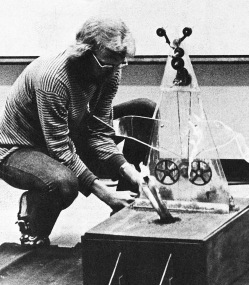 Historical Studies
My interest in art & technology began because I wanted to know why engineers in the 1960s participated in Experiments in Art and Technology (EAT). I combed through files of scores of engineer/artist collaborations, explored the rhetoric of art in the military-industrial complex, and recounted the history of EAT, which I write about in Engineers for Change. From there I turned to the evolution of art & technology institutions from the 1960s to the 1990s. What motivated them? Why did they succeed or fail? I focus especially on MIT’s Center for Advanced Visual Studies (CAVS) and Media Lab from the 1960s to the early 1990s. I was honored to publish an interview with CAVS director Otto Piene and present at MIT’s 150th anniversary.

Contemporary Studies
SEAD is now a billion dollar enterprise remaking transdisciplinary research and careers. My PhD student Kari Zacharias, who is trained as an engineer and ethnographer, and I are exploring the networked-movement behind the current boom in SEAD institutions, which is strongly centered in land-grant research universities. We are asking how SEAD is changing the nature of discovery, engagement, education, and the identities of those involved (including our own). With this work, I am playing a formative role as a Senior Fellow in Virginia Tech’s Institute for Creativity, Arts, and Technology (ICAT).